This is the ENTIRE VOD for the Kingdom Hearts: Birth By Sleep Terra run that we did about a year ago, all 13 hours. I have two more compendium videos to render out, but they’re going to actually take 33 hours a piece, and I’m honestly just impressed that my computer managed to do a 12 hour render without crashing DaVinci in one go, especially considering that it is literally 6 years old. So yeah, those VODs are coming, I just… MIGHT have to split them up, because I believe the render takes about as long as the video being rendered, and that would mean that I have to put my computer out of commission for a grant total of nearly 70 hours LMAO

I mean it still will have to, but breaking it up into 15 hour increments MIGHT be a better idea for me, lmao.

You may need to skip some bits at the opening of each of the streams, I tend to waffle a bit when I stream and chat with everyone, but I do complete these games on the hardest difficulty available in each game.

Chain of Memories currently holds the record for the longest of the streams, and I still had to level up OFF stream, so that isn’t even indicative of the total play time lmfao. I do love that game, but my GOD was it torture.

I have absolutely no idea how long this is going to take to upload. 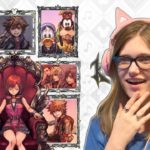